People's Anti-Bucket List - Here's What They Can Never Do 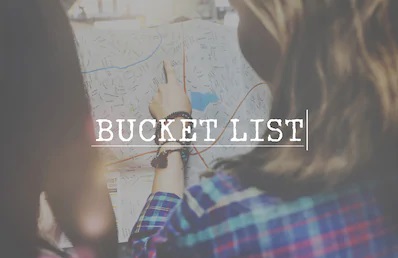 Opposite of a bucket list. Instead of doing something you always wanted to do, this is something you never want to do.
Here's what some people say they can never do.
1. Jump Out Of An Airplane/Skydive

To start off with this might seem weird because it’s usually at the top of people’s actual bucket list. But in the words of my father, “Why would you jump out of a perfectly operational airplane?” When you can just, you know, not.
2. No Way, Bro

I’ll never leave the solar system on a multi-generational colony ship headed for another star. There’s just no way, bro.”
3. Plan A Murder
Murder in lieu of a sin is no answer. You doesn’t just murder the other person, you kill their own soul in the process. Let authorities deal with any sort of artifice. Furthermore, you wouldn’t want to end up in prison.
4. Nope

“I’m an arachnophobe, so both Brazil and Australia are definitely on my f*ckit list.
I’m not scared of being bitten. I have a phobia. I don’t want to SEE a spider any larger than a tarantula. If I came across a bird eater or a Huntsman, I’d have a panic attack. I understand it’s rare to run in to one, but still, no thanks.”
5. Anyway, I Digress.

Things I DON’T want to do:
1. Jumping out of a perfectly good airplane. Why, guys? Why??
2. Scuba diving. I just don’t like the idea of it.

6. Eat A Carolina Reaper – AKA The World's Hottest Pepper

"I ate a Carolina Reaper and even made it in a video with the guy who invented it with millions of views and still won't do it again. I spent 45 minutes naked on the bathroom floor at my friends house it hurt so bad."
7. Be Buried Alive
Only people with a strange sense of humor would have this on their bucket list. I’m not claustrophobic, but if I can’t get out of the ground, you can bet I will lose my ever-loving mind.

A hell lot of things can go wrong here and have went wrong costing the death of many. You haven’t worked so hard in life to eventually fall bait to a shark.

9. Not What You’d Expect

“Boy, this list would be huge. But #1 is being crazy rich. You know, soccer players level of richness. Even if I managed to get this amount of money, I feel like living in high society must be so tiring, I don’t want to experience this lol.”
10. Date A Known Cheater
"Date a girl who cheated with me before getting with me, thinking they would be different while dating me[...] funny joke."